Romulus, My Father is based on Raimond Gaita ’s critically acclaimed memoir. It tells the story of Romulus, his beautiful wife, Christina, and their struggle in the face of great adversity to bring up their son, Raimond. It is a story of impossible love that ultimately celebrates the unbreakable bond between father and son. Developed with director Richard Roxburgh over seven years, Romulus, My Father has been adapted for the screen by poet and playwright, Nick Drake.

‘I can ’t think of a single Australian movie with such a dense and complex emotional texture. I know I will never forget it.’ Helen Garner

‘The singular thing about this story, given its tragic dimension, its almost biblical reach, is how strangely uplifting it is. Somehow through the pain, there is not only a sense of possibility, but of promise, held in the relationship of that father and son.’ Richard Roxburgh

‘A story … with the simplicity of myth and the force of tragedy … I know of no other book where the love between father and son has been more beautifully expressed.’ Robert Manne, Australian Book Review , on the memoir 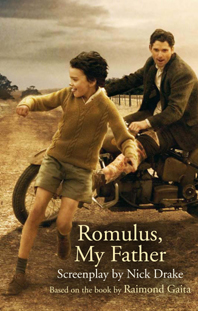